whether it is digitally delivered or read on paper Braille is the key to literacy for the world's 45 million blind citizens. 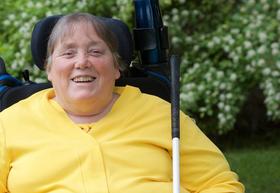 ABOUT MAUREEN & BRAILLE IT

Louis Braille was the son of a French harness maker who was blinded at age three after he accidentally poked his eye with an awl. At the time blind people the world over were basically illiterate. There had been no serious attempts at finding ways in which blind people could read or write. The only reading material available had been made by fashioning small twigs in the shape of print letters and affixing them to paper. The few books available were large, expensive and very impractical Louis Braille invented a reading and writing code which has been in existence since 1825 and is now the world wide standard for books, magazines, and other materials read by blind persons.

The Braille cell which is the foundation of the Braille code is based on 6 dots in the shape of the number 6 on a dice. There are two vertical columns of three dots. The left hand column has dots numbered from top to bottom as dots 1, 2, and 3. And the dots of the right hand column are based on numbers 4, 5, and 6 respectively.

Unlike print letters, there are grades or levels of Braille. Grade one consists of the alphabet and a few simple contractions. Every Braille letter or symbol has corresponding shapes of dots taken from the basic six dot Braille cell. For example, dot one is the letter "a". Dots 1, 2, 3 compose the letter "l". Dots 1, 3, 6 make up the letter "u". If dots 2,3,4 and 6 are used it is a contracted word and stands for the entire word "the".

Grade 2 Braille is composed of many contractions and is the standard form of Braille used in materials read by blind people. Examples of a few grade two contractions are: The letter "p" (dots 1, 2, 3, 4) by itself with a space on either side of it is the word "people". Dot 5 placed to the left of the contracted word for "the" (dots 2, 3, 4, and 6) means the word "there".

Besides having contracted words Braille differs from print in other ways as well. Unlike print letters which are shaped differently depending on whether they are in upper or lower case, Braille does not have this distinction. To indicate that a letter in Braille is capitalized it is preceded by dot 6. To distinguish numbers from letters in Braille numbers are preceded by the number sign (dots 3, 4, 5, and 6. Thus the number one in Braille would be written "number sign dot 1" because "a" is the first letter of the alphabet. To write 5 you would write "number sign e" since "e" is the 5th letter of the alphabet. "j" stands for zero and using this method all numbers can be made from the first ten letters of the alphabet.

In addition to these forms of Braille there is also a completely different code of symbols made from the basic Braille cell for Braille, mathematics, music and computer notation. There is also a grade three form of Braille which is strictly used for note taking and is similar to print shorthand.

Traditionally Braille has been produced in 2 ways. It has either been written by hand using a slate and stylus to physically punch out each dot or by the use of a Braille writer. A Braille writer has six keys corresponding to the 6 dots of the Braille cell. These keys can be pressed down simultaneously to mechanically punch out the Braille letters.

Today, even though most blind people still use these methods of writing to meet their individual needs technology has greatly changed the way Braille is written. There are small note taking devices and sophisticated computer software which are in use to format and emboss Braille. But whether it is digitally delivered or read on paper Braille is still the key to literacy for the world's 45 million blind citizens.

Braille It transcription service is a self-run home-based business run by Maureen Pranghofer. Maureen has the technology and skill to produce high quality Braille documents in an affordable timely and professional manner. This includes the new UEB Braille code which took effect in January 2016.

Braille materials can be produced from print, CD or email files sent in a doc, or pdf format.